Back when I was jumpstarting my fledging agency, I used to attend a lot of events. Between what I could find on Meetup.com and the events hosted by the Chamber of Commerce and our local technology council, I spent at least a night a week chatting (and usually drinking) with local business owners.

Most nights I’d come home and the first thing my wife would ask was, “So… did you get any clients tonight?”

“Maybe,” I’d say as I deposited that night’s loot of business cards into my sock drawer. “These things take time.”

These events almost always yielded no fruit. I’d show up, make small talk, do my best to maintain eye contact, and would swap business cards with whoever I was talking to. And then I’d repeat the ritual again with whoever was next.

My problem was that I didn’t really know what to do next. I’d make attempts to email some of the promising people I’d meet at these events, and I had every intent to keep in touch and ultimately win them over (or at least convince them to send me a referral or three). 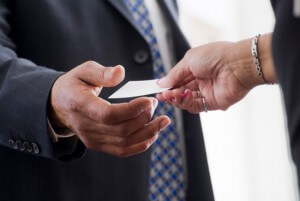 But these contacts almost always ended up going nowhere beyond my sock drawer.

I was too focused on selling.

You’ve probably heard that networking is all about creating relationships. That’s great and is totally true, but that advice doesn’t tell you much about how to convert a sock drawer of cards into meaningful relationships.

When I started “professionally networking,” my thought was that I’d show up at these events, talk to people, and when the question “so, what do you do?” was inevitably asked, I’d tell them I built websites and applications. And maybe I’d get the response I was looking for: “Oh! You build websites. We should talk. I need a website.” It was a numbers game, right?

However, this rarely happened. To be honest, I was getting pretty burned out from all this networking. Showing up night after night and mingling with little to show for it wasn’t sustainable, and I almost wrote it off completely.

Then a mentor of mine clued me in on what I was doing wrong:

“Brennan, you’re not giving them anything.”

If the purpose of networking was to match up people who need websites or whatever with those who can provide, there are far more efficient ways of doing that. Job boards are basically that.

True networking though, is a mutual realization that each party is capable of delivering value to the other. This isn’t done when your intent is to drop a list of what you do for a living, who you’ve worked for, and other bits of bait meant to lure someone in.

This means that instead of talking first and foremost about your business, you instead take the time to learn about someone else’s. What have they been working on lately? What problems do they have? What sucks?

And rather than trying to make a sale, you should instead be trying to sell somebody on yourself first before selling them on your services.

I’ve been out of the dating pool now for about a decade, but I remember recently seeing a guy on YouTube who would stand at street corners and proposition women who passed by. His conversion rates were miserable. He was practicing a shock and awe campaign, and hoping that the law of numbers would be on his side.

This was a bit like me back when I started networking. I’d shock and awe. I was hoping that someone would go home with me on that first date — and by go home, I mean become a client 🙂

So the obvious next question is: How can you court people you meet at networking events?

Ask them to join your super secret club…

I’ve utilized a lot of tactics to do just this, and some have worked better than others. But the single best tactic I’ve come across is the “super secret club” trick. (In my new course, I’m covering a lot of those others tactics).

So what’s this trick?

The type of people who typically attend networking events love getting new business through these events, but they also tend to really like going to these events. They often love networking for the sake of networking.

So here’s what you can do: The “call-to-action” after you’ve talked to someone at an event is typically “we should stay in touch,” followed by an exchange of business cards.

Try this next time:

After meeting somebody new at an event, tell them that you really enjoyed chatting and that you want to run something by them.

You just so happen to organize a small, invitation-only group of local business owners who are interested in the intersection of [what is it you do] and business, and you think they’d be a great addition. Ask them if you have their permission to add them to your group — let them know you occasionally organize get-togethers and often send out interesting tidbits about business. I’ve seen people refer to this as their “Insider’s Circle”, but I wouldn’t get caught up on a name — my agency ultimately had a few thousand people on our list, and we never had a proper title of any sort.

You now have subscriber #1 to your newsletter, or another subscriber if you already have a list. And you now have permission to talk with them. But most importantly, you have set yourself up as an authority in that intersection of what it is you do and what they care about (their business). Whether you know it or not, you’ve sown the seeds of establishing yourself as an influencer.

As you attend more events in the future, this list will grow. And you’ll soon be able to start hosting your own networking mixers, seminars, and more. You’ll also slowly build up your reputation with those in your super secret club, and you’ll be kept front and center in their minds — which is hugely useful if you want them to think of you the next time they have a project or possible referral.

If you plan on picking up my new course, Double Your Freelancing Clients, I’ll be drilling into a lot more details around this, including how to technically opt people in on the spot and cultivate these relationships automatically over time. But in the meantime, give this tactic a shot the next time you attend a networking event or conference. Trust me – it’s much more effective than just ritually exchanging business cards with another face in the crowd.

How about you? What’s been your strategy to kick off new relationships at networking mixers?